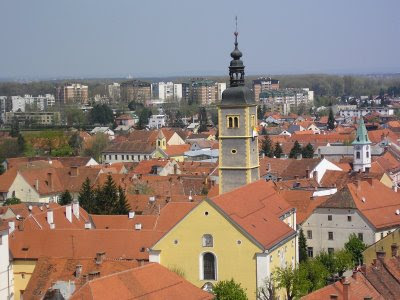 Every Saturday our Church in Varazdin goes out and passes out John and Romans. Each John and Romans contains two Gospel tracts. This ministry does not take the place of Soul-winning. We knock a lot of doors, and believe it is God's command to go and verbally preach the Gospel to people.

Not too long ago we were passing out the John and Roman's. In Croatia it is legal to put them in mail boxes, so our goal is to make sure everyone in this city gets a portion of God's Word and they receive a Gospel tract. (You that have followed our ministry know that Croatia is a difficult place to minister. It is mainly Roman Catholic, and they look at Baptist as a sect, I think to them sect comes from the word insect! At least that's how they treat Baptist in this country.) Well back to my story. Not too long ago we were passing out the John and Romans. A few hours later I received a phone call from a man that thought it was his God given right to tell me what he thought of Baptist, I tried to be kind, although it wasn't easy! He was a typical Catholic man that didn't understand why we thought it was important to convert him and his countrymen! I tried to help him see, but to know avail.

This past Saturday our little group headed out as we have done many times before to stuff mailboxes with God's Word. We had a great time serving the Lord together. As fait would have it about 9:30 PM my phone began to ring, and the number displayed on the caller ID was from Varazdin (I immediately braced for what was about to come. ) Another chewing out by a Catholic who thought it was their duty to set us Baptist straight! Boy was I ever surprised when I answered the phone. There was a lady on the other end and she was crying uncontrollably. She told me she received one of our packets and she read the Gospel tracts. Then she begin to tell me how her life was a wreck and she needed help. I tried to talk to her, but to be honest it was difficult to understand everything, because she was crying so much. I got her number and a few days later was able to talk to her, and then she told me she called the other night because she received one of our tracts and she believed on Jesus! As my friend Brother Sam always says, somebody shout Hallelujah! She said she would come to our Church this Sunday. Please pray for her, her name is Andrija.

God taught me through this that you never know when your phone rings who might be on the other end! All I can do is praise the Lord for working in Andrija! Praise the Lord that He is not willing that any should perish!
Posted by Johnny at 7:56 AM

Labels: Life in the field

Praise God! Many think door to door soul winning is outdated and that passing out Gospel tracts is useless but God still works through these means! I will be praying for your chance to disciple this lady!

This is a great testimony and I will use it to encourage our folks. I will also be praying for Andrija

Hot Dog! I am having a shouting fit. Hallelujah. Amen.
That's what it's all about. He's not willing that any shoud perish.
Bless the Eternal God of Heaven!

Sure praying to see her Sunday morning!